skip to main | skip to sidebar

Workshop to be held at the Bellview Grange, at 1050 Tolman Creek Road in Ashland, Oregon

Cost of the workshop is $95.  Click on the Paypal button below to register. Please include name(s) of participant(s) in the instructions section. Thank you! 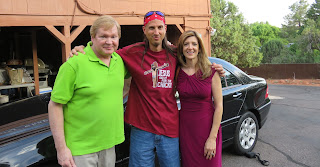 The Dude, Where's My Jesus Fish? Facebook page: Daily quotes posted from Gary's books and A Course in Miracles accompanied by scenic pictures taken by Mikey,

Giddy Up Mikey's You Tube Channel: Mikey Talks The Disappearance of the Universe and A Course in Miracles

Mikey on the Betsy Pake Podcast: Mikey talks about A Course in Miracles with many references to The Disappearance of the Universe 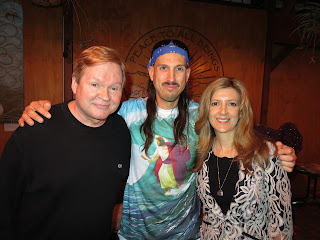 Here is my review for the soon to be released book by Gary Renard's very lovely wife, Cindy Lora-Renard, titled A Course in Health and Well-Being. (Picture is of me with Cindy at the University of Toronto; May 2015)
In this book, the author, Cindy Lora-Renard, shares her thoughts on the principles of A Course in Miracles with a focus on health and well-being, explaining how sickness is always of the mind and has absolutely nothing to do with the body. Cindy explains the steps to apply true forgiveness and how it is the means for healing and awakening from the dream of experiencing yourself as a body, as the body itself is just a projection of the mind; it doesn’t really exist. Practical suggestions on how one can apply this concept into his or her life to help bring about this experience are also shared.
Cindy also talks about a few of her own trials and tribulations which she applied the Course’s message of true forgiveness to, stressing the importance of non-attachment. As she so eloquently puts it, “The goal of the Course is to experience peace regardless of what is going on in the world or in your body. That is true power; the power to choose peace under any and all circumstances.“
In addition to making very clear distinctions between what traditionally passes as forgiveness in this world – what A Course in Miracles refers to as “forgiveness to destroy” – and what true forgiveness really entails, Cindy stays true to the pure non-dualistic message of the Course, the message being that there is no world and only God is real. Because of that, this book reads similarly to Gary Renard’s The Disappearance of the Universe trilogy, but without the in-your-face dialogue and smart ass banter. So if you’re looking for a kinder, gentler approach to pure non-dualism then this is for you.
As a result of presenting A Course in Miracles in a consistent and non-compromising fashion - which seems to be rare among those who are labeled as “teachers” of the Course - Cindy has my utmost respect as a presenter, speaker, writer, and teacher of Jesus’ Course. Giddy up!

Gary Renard is the frickin' man! Gotta love this Gary character, he really sticks to the Course! Giddy up!
In addition to what Gary shares in this letter, I would also add that from my personal observation, that those who are usually drawn to versions of the Course not published by The Foundation for Inner Peace usually make it about what you DO in the world, messing around with effects, rather than taking care of the mind, which is cause. Yet the Course teaches, "This is a course in cause and not effect."
Additionally, those same people don't seem ready to accept the idea that they don't really exist as an individual soul or identity of any kind. But as the Course tells you, "You can defend your specialness, but never will you hear the Voice for God beside it."
Now, I don't say any of this to condemn anyone in any way, as people can only accept what they're ready to accept, but as Arten and Pursah would say, "We don’t mean to be disrespectful, but we have to make certain controversial statements because there’s not exactly an oversupply of people in your society (or Course community) who are willing to point these things out."
Anyway, here's what I Gary wrote in response to comments made at the NYC conference about the Foundation for Inner Peace's version of A Course in Miracles being a lie.
Link to Gary's Write-Up

The Course, of Course!  Includes many references to the books of Gary Renard - The Disappearance of the Universe, Your Immortal Reality, and Love Has Forgotten No One - and my book as well, Dude, Where' My Jesus Fish?  Enjoy!  Giddy up!

Access the podcast here: The Course, Of Course Podcast
Posted by giddyupmikey at Monday, March 30, 2015 No comments:

Part 2
If it's all scripted, and the script is already written, why bother to do anything then? This excerpt from Your Immortal Reality answers that question.

Gary: Okay, I have a question. Every now and then I read about one of these Nazis who escaped to South America, and there will be a report that the guy died and he was like in his 80s or 90s or something. Now I’ve been told for the last 25 years that my thinking determines my health. So how come these jerks get to live to be a hundred? I mean, what kind of thoughts must THEY have been having most of their lives?

Arten: Get a grip, Gary. Your thoughts determine your EXPERIENCE of life, not WHAT happens n your life. What happens on the level of form – how long you live, how rich or poor you are, whether or not you’re faced with the challenge of heart disease, stroke, cancer, or what have you – was all determined before you ever appeared to be born. The instant you chose the ego on that metaphysical level, everything else was a done deal. That’s why life here isn’t fair. And don’t ask why you should even bother! I just said you DO determine your EXPERIENCE with your thoughts, and your experience is what’s important.

The only real power you have here is the power to choose between the ego and the Holy Spirit. In the process, if you happen to change dimensions of time through the Holy Spirit’s collapsing of time and thus have a different scenario play itself out within the fixed script, then you should consider that to be a fringe benefit. That’s not what the Course is about, though.

As for the collapsing of time, remember that only the Holy Spirit knows what’s best for everyone. Put Him in charge of time and space. Put the one in charge who knows everything. If you’re sick and your symptoms change through choosing forgiveness, then consider THAT to be a fringe benefit, also. The real goal is Heaven, but the short-term goal is peace, and the end of all pain and suffering. It’s absolutely within your means to learn to end all pain and suffering, despite anything that appears to be happening in the world and regardless of what your symptoms appear to be. That’s the Holy Spirit’s answer to the ego’s script of guilt, pain, suffering, and death.

Gary: So that Nazi would have lied to be 90, anyway, but the quality of his life and how he experiences those 90 years is determined by his thoughts, and that also goes for his spiritual progress and how many more lifetimes he has to come back for.

If it's all scripted, and the script is already written, why bother to do anything then? This excerpt from The Disappearance of the Universe answers that question.


Pursah: You may think you have free will here and that you can determine what's going to happen to you, but the truth is it's all happened already. You're just playing the tape, watching and listening - thinking it's all real and a result of your own volition or chance on this level, rather than a set-up from another level.

Gary: Why should I bother to do anything, then?

Pursah: Two reasons. First of all, even though it's a closed system, there are different scenarios open to you in each lifetime. Making a different choice that doesn't involve the Holy Spirit within the dream won't undo your unconscious guilt and get you out of the system, but it can result in a temporarily different experience.

It's like a multiple choice script, where if you make a different decision, then a different scenario will play itself out. If you make one decision, you get the girl and have a good time - but if you make another decision, you blow it and end up with depression. It's even possible to live the same lifetime over again, with a different set of earthly results. Once again, none of that will get you where you really want to be. It will just keep you stuck here, attempting to achieve temporary happiness.

The other, far more important reason why you should be engaged in your decision-making is to return to your right mind and choose the Holy Spirit instead of the ego, which WILL get you where you really want to be. Forgiveness has its fringe benefits in the dream, some of which are not always obvious to you, For instance, let's say a man murders his wife, or a woman murders her husband. One of them is dead, and the other spends the rest of their life in prison or gets executed. But what if they had learned to forgive, and there was no killing? Would that change things on this level?

Gary: It would change everything, and people probably wouldn't even be aware of it.

Pursah: Yes. That's an extreme example, but ere are thousands of scenarios where even on the level of form, forgiveness has results -
and you often don’t realize how much better off you are than you would have been if you didn’t forgive. That’s why you want to develop a trust for the Holy Spirit. He really does know what’s best for you. So don’t think it’s not important for you to take charge of your own mind from this level. Indeed, it’s what the Course is training you to do. Control of your mind even gives you the power to stop pain in your body.

Some, maybe even most, politicians are sincere in doing some good before they take office. But once they get elected, they're pretty much just puppets on a string attempting to rearrange the furniture in a burning house. So suffice it to say that Mikey has no use for politics. Though I will vote during the presidential race, and on a few occasional local measures, but do so without any attachment to the outcome. I should also note that yes I do believe the U.S. government was involved in orchestrating the events of September 11, 2001, but does it really matter? The world can't really be fixed, it can only be awakened from. It's just a dream.
Link to post on Personal Facebook Page: Facebook.com/giddyupmikey/post
Link to post on Dude, Where's My Jesus Fish? Fan Page: Facebook.com/DWMJF/photo
Posted by giddyupmikey at Wednesday, June 11, 2014 No comments:

giddyupmikey
Hi, my name is Mike, and my blog titled Mikey's Disappearance of the Universe Blog is all about the books of Gary Renard and A Course in Miracles. My very first book, Dude, Where's My Jesus Fish? contains many quotes from the aforementioned books, and can be purchased directly from me via my website: www.giddyupmikey.com. Gary Renard was kind enough to write the Foreword for it. You can also become a fan of Dude, Where's My Jesus Fish? on Facebook: www.facebook.com/DWMJF Giddy up!

Quote of the Day Link

Mikey's DU Quote of the Day

Gary on You Tube

A Course in Miracles